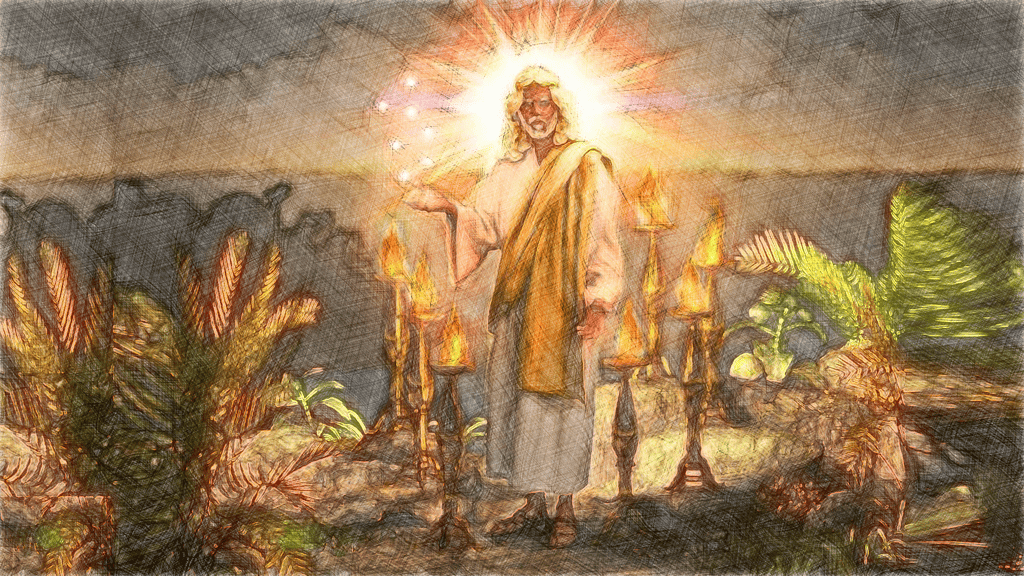 So, what is the Millennium, and when will it occur?

It is a prophetic time, the next great age. Our world today will not continue ad infinitum. At some point in the future, the Lord will appear in the Heavens and call His church to Himself. This global cataclysmic event is called the Rapture and sets off a series of events that will usher in the Tribulation, seven years of wars, famine, earthquakes, fire, and pestilence; hell on Earth. But in the end, the evil forces are defeated. The Lord returns to rule, ushering in the Millennium, one thousand years of paradise, a return to what was lost in Eden.

There are dozens of details and points of doctrine that I do not directly address in the series:

For storytelling purposes, the absence of the sun and the moon in the Millennium was quite foreign and created obstacles that did not further the tale. Many scholars believe that Millennial Earth will have two sources of light, New Jerusalem (Heaven) and the Golden City of Jerusalem.

The names of cities, towns, and places remain relatively modern, with a few exceptions. I considered renaming the whole world and changing the geography, e.g. a reformed Pangea, which would be realistic, but again, it made the storytelling exceedingly difficult and required more descriptive passages than necessary to demonstrate the setting.

People achieve great age in the Millennium, unless they do not come to faith in Christ. If they don’t, their maximum age is 120 years. The faithful will probably live to ages we see in the Pre-flood era of the Old Testament, if they die at all. It is possible 1000 year old people walk the Earth. Interesting, but it complicated the story. Consider the possibility that there are people alive today who will live to see the events described in the novels. That gives a new meaning to the nickname we have given this generation, Millennials, now doesn’t it?

Vegetarianism – in all likelihood, the Millennial world will be a vegetarian utopia. I allude to the return of carnivores and carrion birds and found that bacon… well, Josiah half falls in love with Davianna when she sets a plate of it in front of him, and that was just too much fun not to write.

Scriptures is not straightforward on the nature of Millennial salvation. It is plausible that at the start of the age, a third Testament will be given to guide and govern the lives of those who survive the Tribulation. Consequently, our understanding of their salvation is incomplete. There are clues and much can be gleaned from the bible. Consider the detailed instructions given in Ezekiel on temple worship, which is likely for the Millennial era. Furthermore, there are misunderstood passage in the New Testament that outline a believer’s responsibility to stay in fellowship, lest they lose their salvation. It is this author’s firm belief those scriptures were penned for Millennial believers and do not affect the eternal and immutable salvation given to believers during the Church Age. Millennial salvation is likely a blending of the Old and the New Testaments, requiring faith in the sacrifice of Jesus Christ, but also obedience to the Ten Commandments, observance of Passover and Sukkot, and a return of a form of Old Testament temple sacrifices performed by the priests in Jerusalem.

Modern readers and audiences, by and large, do not have an understanding of the power of blood or the significance of sacrifice. I felt that including this aspect of Millennial worship might be a stumbling block and would detract from the overall message. Finally, these stories were written at a time when the Cross is sufficient and ultimately always will be.

If you are interested in learning more about Scriptural Millennium, I highly recommend Jack Kelly’s site, gracethrufaith.com